A mechanical engineer became an active blogger, and it’s James Miller. Well, the journey of his blogging started more than a decade ago. As a...Read more

When it comes to selecting an ebike, the first thing you’ll have to consider is the power it comes with. And when it’s about the power indicator terms, voltage(V) is the most common one you’ll come across.

Voltage has its role in the power conversion system which influences the final amperage. Let’s get you through the eBike battery voltage chart that will give you a complete idea of how to choose and how to decide for yourself.

So, if you’re planning to get an eBike or are confused about the power your current ebike holds, this guide is going to be helpful. Let’s get on with it!

What Voltage Do I Have in My Ebike Battery?

Knowing the battery capacity and the power output of your ebike is important and an easy thing to do as well. You can check out the technical specifications the ebike manufacturer has provided.

The most common ebike battery voltage is 48 volts. You can also find a vast number of ebikes holding 36 volts batteries while some high-end ones offer 52, up to 72-volt batteries. If you have a 500 to 1000-watt ebike, chances are, you’re driving on a 48v battery.

In case you’re not sure anyway, you can check the battery voltage of your ebike using a multimeter. Grab a multimeter, turn it on, put the meter on V (voltage) mark, and connect the check leads positive to positive and negative to negative. You’ll see the voltage it holds.

As electric bike batteries have a range of power indicators from 36 volts to 72 volts, let’s see them all; one after another. We’ll try to portray the gradual charge and discharge graph of the batteries at different voltage levels.

Remember, the voltage your ebike manufacturer labels the battery with is the nominal voltage. You get this output as a constant voltage, not the peak power.

The peak power, on the other hand, will be more than the advertised figure that you achieve while charging. For example, a 48V battery fully charges at 54.6V.

Here’s what voltage you have at which percentage of your ebike battery:

This means when you have your 36v battery fully charged, if you check the output, you’ll see around 42v of it. At 90%, this goes down to 40v and comes around 50% when you’re talking about 36v as a usable battery left.

Here’s what voltage your ebike battery will be at which level of its discharge cycle:

This is why you’ll see some manufacturers advertise their 500-watt ebike as having 750-watt peak power. In reality, the 500-watt ebike cannot give you a consistent 750-watt output; only a peak of it.

As 4.2v cells fully discharge at 3.0v, you should never go down to the 10% battery level on your lithium-ion 48v battery.

If you’re running on a 52v, it’s essentially a scaled-up 48v battery with a 14-cell design. And here’s what the voltage chart at different charge levels would look like:

As you can see, a 52-volt battery (consisting of 14 cell structures of 4.2v cells) peaks at 58.8 volts when charged at 100%. As you discharge the battery, the battery management system (BMS) will regulate the discharge cycle. 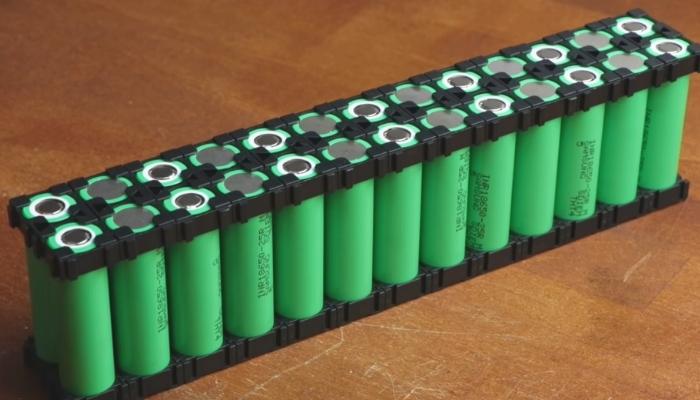 Most of the ebike models you’ll come across are at this level; 48 Volts. Still, you’ll also come across 60 and 72-volt ebike batteries as well. Let’s go through them both.

72V ebike batteries are the least used and the most powerful ones so far. It has a very small rider base of users. These batteries come with 20 cell series design, each battery containing 4.2v, combined has over 84 volts altogether. Here is what voltage you’ll have at different capacities of the battery:

Here’s how much of the battery you’ll need to make a 72-volt battery:

As you can see, the nominal voltage and the peak voltage are not the same on an ebike. That is why when the ebike manufacturers advertise as having a 48-volt battery in their ebike, it actually comes with a 54.6-volt battery.

You can do the math yourself with all the lithium ion battery cell types and their voltage (peak, nominal, and cutoff) from here.

With 13 cells in the pack, each being 4.2 volts, you’ll have a peak acceleration of up to 54.6 volts while putting the battery on stress.

How to Determine the Right Voltage?

So, if you give up the dividend out of the way, you should be running flat at 30-39 volts. If the jargons (volts, amps, watts) seem mind-boggling to you, here’s a guide for you to understand it all:

Volt (V): Volt is the primary unit of current in an ebike battery where it represents each cell’s power.

Amps (A): Ampere or amp is the amount of current the battery is producing each time it passes the volt to the consumer.

Watt (W): Watt is the final quantitative measure of a battery where you get it by multiplying volt with amps.

Watt Hour (Wh): Watt hour is the indication of the backup time you get from the whole battery pack. If it’s 500 Wh, you can run the bike for 1 hour at the 500-watt output.

Battery Management System (BMS): BMS helps the battery pack stay at a safe charge and discharge cycle along with surge protection. You can see 10S, 13S, 16S, and 20S representing the type of BMS

Now, all these batteries are among lithium ion cells that have different variations within them. You’ve got lithium cobalt, which is the most popular and standard among good ebikes. Within lithium cobalt, you may see different acronyms like LCO, LiCoO2, etc.

We’ll list them below with the voltage level of each cell as the discharge cycle. We’ll include when it’s fully charged (Full), the operating voltage at work (Nominal), and the cutoff voltage (Cutoff) when the battery will go flat (fully discharged):

Since the term voltage itself indicates the unit of current (i.e. strength) of the battery, higher voltage means more power. You’re getting more battery cells that offer more powerful riding.

So, with high voltage, you can expect to ride your ebike at a higher speed because the battery pack is capable of running a bigger motor.

Another great advantage of having a more powerful battery (more voltage) is you’ll get a longer run time. That’s because higher voltage eventually increases the final Amp hour.

Let’s get you through some tips that will help you take good care of your ebike battery:

Most ebikes (well, 100% of the new ones) now use lithium-ion battery cells instead of lead-acid batteries. Li-poly batteries are much more efficient, pose no harm if packed well, and have a much better backup compared to flooded lead acid ones.

So, we’ve tried to portray the complete voltage chart of all sorts of ebike battery types that you get to see in ebikes; from 36 volts, all the way up to 72 volts. Regardless of which one you go with, remember that you’re getting more voltage, and will have limitations.

The peak voltage will be bigger than the advertised number, and you should not keep using the battery below the 10% state. That can pose harm to the lifespan of the battery. Do your match by the cutoff chart above so that you have your safety barrier before it goes dry.

A mechanical engineer became an active blogger, and it’s James Miller. Well, the journey of his blogging started more than a decade ago. As a mechanical engineer, he started his professional career as a technical assistant in a renowned automotive industry and later joined an e-bike manufacturing company as a quality in charge. James created this site “Bikerreview” to share his decade of experience with e-bikes. He wants to help the people who are newly looking for an e-bike and doesn’t have any prior knowledge about that.